Originally coined by Chila, Peckham and Manheim, back in 1981 and used for the title of their course at Michigan State University: ‘‘Myofascial Release’’

What is fascia tissue?

Fascia is the body’s connective tissue. It's fibrous cobweb-like connective tissue found throughout the whole of the body runing from head to toe. Your fascia provides a framework that helps support and protect individual muscle groups, organs, and the entire body as a unit.

What is a strength curve?

A strength curve is a graphical representation of how a muscle generates and applies force in a specific direction. This force is then represented using three basic categories: ascending, descending and bell-shaped.

A concentric contraction occurs when a muscle shortens. An example of this would be when you're coming up from a bottom of a squat.

What are muscle fascicles?

In anatomy, a muscle fascicle is a bundle of skeletal muscle fibers surrounded by perimysium, a type of connective tissue.

Who is Michael Goulden?

Michael Goulden is the founder of Integra Training is a resistance training specialist in exercise mechanics. He has been integrating exercise mechanics with neuromuscular preparation to create a uniquely sustainable approach to health, fitness and performance.

Who is Charles Poliquin?

Charles Poliquin is recognised as one of the world’s most accomplished strength coaches, and has produced hundreds of medals, wins and personal bests for elite athletes in over 17 different sports, including athletes for both the summer and winter Olympics, the NHL, and NFL.

Who is Ben Pakulski?

Ben Pakulski, nicknamed the Pak-Man, holds an Honors Degree in Kinesiology and is an IFBB professional bodybuilder and winner of the 2008 Mr. Canada competition. In the IFBB, he finished 2nd twice in 2008.

What is a level 5 trainer?

Our level five trainers are our ‘elite’. They’re seriously experienced, and incredibly knowledgeable. They have all gone above and beyond, attending numerous industry events, clocking up multiple courses, and spending numerous hours learning through practical experience with clients. They have shown unparalleled dedication to becoming the best personal trainers possible, and have been recognised in the health and fitness industry for their level of excellence.

What is a level 4 trainer?

Our level four trainers have gone the extra mile. All of them have further industry qualifications, whether in nutrition, post-natal exercise, endurance or hypertrophy. They have attended workshops, webinars and courses to lift their learning above others in the area. They are likely to have been a personal trainer for several years, and be pushing to learn more about how they can offer the best possible advice to you.

What is a level 3 trainer?

Our level three trainers are fully qualified, with industry-recognised qualifications, but are relatively new to personal training. What they lack in experience, they will make up for in dedication and enthusiasm. All our level three trainers work closely with a more senior member of the team to ensure the Hall Training quality of service is maintained, and you make constant progress towards your goals.

This is a tooltip

Video Lesson: How to Build a Personalised Diet

The Difference Between Fitness and Conditioning - Part 2

What's the Difference Between Fitness and Conditioning?

How to keep NEAT high during lockdown

It's January, and lots of us are thinking about taking up a new exercise regime or increasing the time we spend in the gym. But it's important not to do too much too soon, despite your best intentions. BBC Newsbeat contacted our executive personal trainer Chris Hall to talk about how much exercise is too much, and how to spot the signs of over-training. You can read his full comments below. 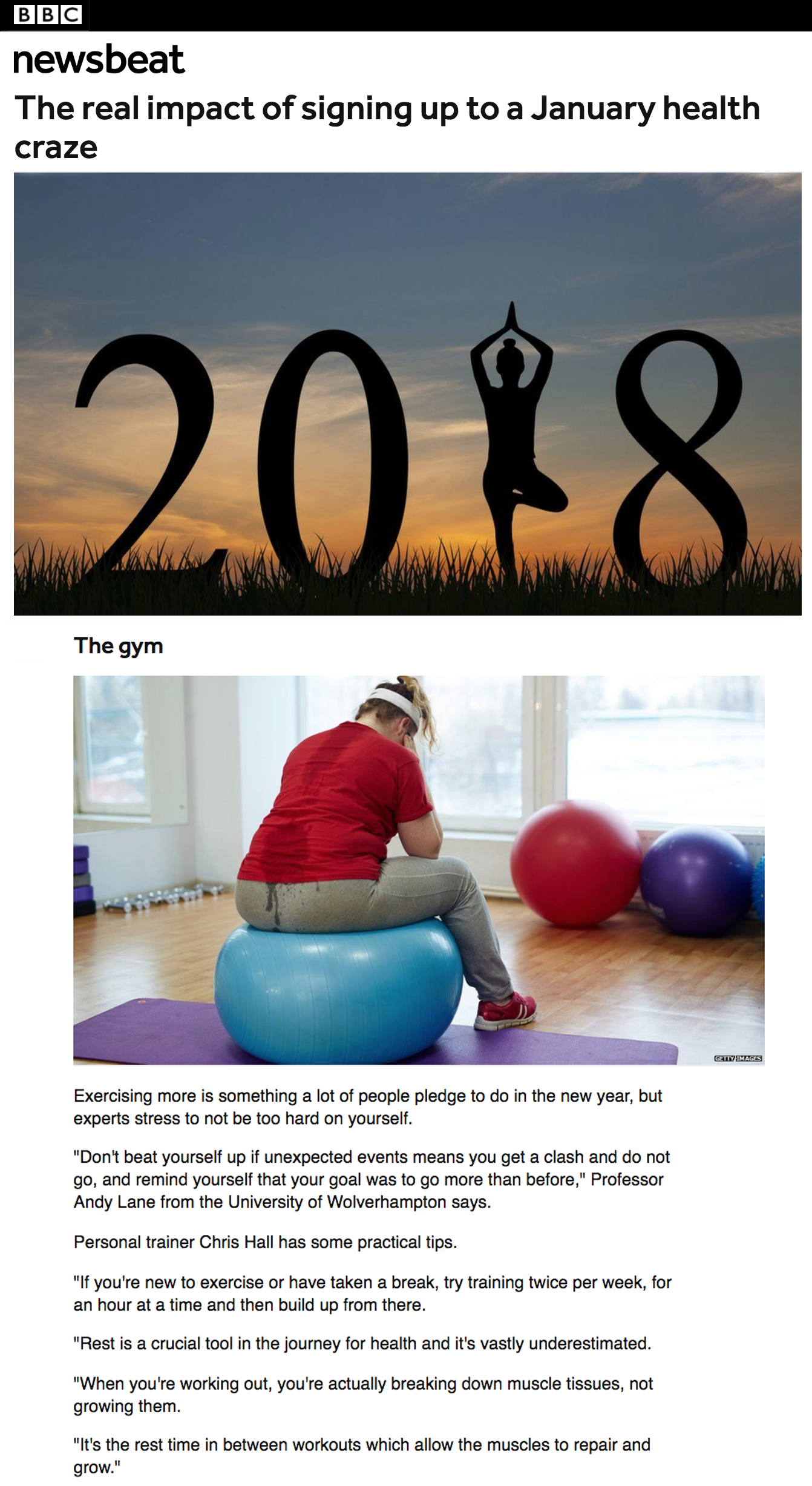 Q1: How much exercise is too much?

The definition of “too much” exercise will vary from person to person. If you’ve not exercised for a few months and set out to run a marathon, it’s very likely that’ll be too much, but for a seasoned marathon veteran, it’d be a normal day’s training.

If you’re new to exercise or have taken a break, try training twice per week, for an hour at a time and then build up from there.

Q2: How do you know if you’re doing too much exercise?

Things to look out for include your ability to fall asleep, and your ability to stay asleep. If you struggle to fall asleep more than normal, it could be a sign that you’re spending too much time training and/or not taking enough rest days. If you’re struggling to stay asleep, it could suggest that you’re training too aggressively and may need to back off slightly from the weights you are lifting.

Another simple thing to measure is your morning heart rate. Most phones and fit-bits now are equipped with heart-rate monitors. Once you’ve established a baseline you’ll be able to see if your morning heart rate is raised. If it is, this could suggest that you’re overtraining. If you’re training too hard, your body will be working overtime to help you recover and to meet the new demands you’re placing on it, causing your heart rate to elevate. Try backing off or resting up until for a day of so until it’s gone back to its baseline.

Another sign to look out for would be overall performance. If you’re suddenly surprised to find yourself having to drop the weights that you would usually lift or, unable to keep your regular pace during those HIIT sessions then this sudden, unexplained drop in performance could be the body’s way of telling you “I’m out of gas and need some rest.”

Q3: What damage can you do by exercising too much?

The most obvious risk of over-training is injury. If you’re overreaching then you’re far more likely to be triggering old injuries to reoccur, or even gathering new ones. You’re also at greater risk of becoming ill if you’ve worked your body into an over-trained state, as your immune system won’t be working as effectively as normal.

There can also be dangers to your mental health. A lack of sleep can lead to depression and mood changes, which can then be aggravated by feelings of failure or low-self esteem if you’re not managing the workouts that were easy for you a couple of weeks ago. Exercise should be a positive experience, so if it’s something you once enjoyed and you’re now dreading it, that’s a good sign you need to take a break. Try taking a full week off, and then slowly increasing your workouts again after that.

Q4: Why is rest important?

When you ask people why they are exercising, it’s usually because they want to be healthier. It’s not uncommon to hear that people are going to go from nothing to hitting the gym or pounding the pavements five-to-seven times per week. However, rest is a crucial tool in the journey for health and its vastly underestimated. Rest is important for recovery and repair. When you’re working out, you’re actually breaking down muscle tissues, not growing them. It’s the rest time in-between workouts which allows the muscles to repair and grow. If you over-train then you hamper the body’s ability to recover, leading to the symptoms listed above.