Originally coined by Chila, Peckham and Manheim, back in 1981 and used for the title of their course at Michigan State University: ‘‘Myofascial Release’’

What is fascia tissue?

Fascia is the body’s connective tissue. It's fibrous cobweb-like connective tissue found throughout the whole of the body runing from head to toe. Your fascia provides a framework that helps support and protect individual muscle groups, organs, and the entire body as a unit.

What is a strength curve?

A strength curve is a graphical representation of how a muscle generates and applies force in a specific direction. This force is then represented using three basic categories: ascending, descending and bell-shaped.

A concentric contraction occurs when a muscle shortens. An example of this would be when you're coming up from a bottom of a squat.

What are muscle fascicles?

In anatomy, a muscle fascicle is a bundle of skeletal muscle fibers surrounded by perimysium, a type of connective tissue.

Who is Michael Goulden?

Michael Goulden is the founder of a training company and is a resistance training specialist in exercise mechanics. He has been integrating exercise mechanics with neuromuscular preparation to create a uniquely sustainable approach to health, fitness and performance.

Who is Charles Poliquin?

Charles Poliquin is recognised as one of the world’s most accomplished strength coaches, and has produced hundreds of medals, wins and personal bests for elite athletes in over 17 different sports, including athletes for both the summer and winter Olympics, the NHL, and NFL.

Who is Ben Pakulski?

Ben Pakulski, nicknamed the Pak-Man, holds an Honors Degree in Kinesiology and is an IFBB professional bodybuilder and winner of the 2008 Mr. Canada competition. In the IFBB, he finished 2nd twice in 2008.

What is a level 5 trainer?

Our level five trainers are our ‘elite’. They’re seriously experienced, and incredibly knowledgeable. They have all gone above and beyond, attending numerous industry events, clocking up multiple courses, and spending numerous hours learning through practical experience with clients. They have shown unparalleled dedication to becoming the best personal trainers possible, and have been recognised in the health and fitness industry for their level of excellence.

What is a level 4 trainer?

Our level four trainers have gone the extra mile. All of them have further industry qualifications, whether in nutrition, post-natal exercise, endurance or hypertrophy. They have attended workshops, webinars and courses to lift their learning above others in the area. They are likely to have been a personal trainer for several years, and be pushing to learn more about how they can offer the best possible advice to you.

What is a level 3 trainer?

Our level three trainers are fully qualified, with industry-recognised qualifications, but are relatively new to personal training. What they lack in experience, they will make up for in dedication and enthusiasm. All our level three trainers work closely with a more senior member of the team to ensure the Hall Training quality of service is maintained, and you make constant progress towards your goals.

This is a tooltip

How to train your heart

Irritable Bowel Syndrome: What is it and how can I manage it?

Admit it guys and girls, we're all guilty of it. There has been a time in most of our lifting careers when ego has got the better of us and we\'ve favoured the weight over the technique. I'm outright here to admit I was one for sure. At the start of my lifting career, I only lifted using short/partial range of motion (ROM). I remember my first ever weight training book by Pete Sisco & John Little, called Power Factor Training - A scientific approach to building lean muscle mass. It was a book and a system developed around the method of using partial reps to train a muscle in a shortened state for maximum hypertrophy. I saw the word 'scientific' and so thought it must be gospel! Unbeknown to me about the real science behind proper lifting techniques and muscle hypertrophy.

However, since then 11 years have passed and I've grown wiser of the lifting community. Developing a greater understanding, knowledge and application of examining the bro-science against the actual science. So, when I was clearing up tonight I stumbled across my old Power Factor Training book which ignited an unanswered question. Does working a muscle in its shortened range of motion (aka partial reps) have any greater benefit on a muscles size & strength over a full range of motion?

Well, let's take a look at the evidence for a moment...
Due to the greater difficulty in measuring muscular cross-sectional area (size/strength at its largest point) over a long-term period, there are very few studies comparing the results between short ROM over full ROM however, here are the ones I dug out.

In 2012, a 10-week study [1] evaluated strength and muscle gain differences between full ROM and partial ROM when performing preacher curls (see figure 3). Researchers asked the 40 untrained males to perform preacher curls twice per week for 10-weeks. One group lifted the weight from 0 to 130 degrees (full ROM) whilst the second groups lifted the weight from 50 to 100 degrees (partial ROM). At the end of the 10-weeks the researchers discovered the following results:

However, the difference between hypertrophy of the two groups was not significant.

In 2013 Bloomquist and his researchers compared the effects of partial ROM (0-60 degrees) and full ROM (0-120 degrees) on thigh muscle cross-sectional area when performing a back squat.
Both groups were asked to do 3-4 sets of 3-10 reps both to failure and then not to failure. Their results found the group who performed full ROM increased total quad muscle cross-sectional area across the entire sites of the quadriceps, whereas the partial ROM group only saw increases across two heads of the quadriceps and at the most proximal sites - the site nearest the hip. Additionally the full ROM groups also noticed a greater muscle cross-sectional area at the back of the thigh (hamstrings) than the group who performed partial reps [2].

Lastly, another study done in 2012 by McMahon looked at partial ROM vs. full ROM on three knee extension exercises using 80% of 1RM on the squat, leg press and leg extension. The researchers found that the vastus lateralis muscle cross-sectional area increased significantly in both groups. They also noted the full ROM group displayed greater relative gains in the vastus lateralis muscle cross-sectional area compared to the partial ROM group. However, the difference between groups was only significant at the end of the 8-weeks, with the full ROM group displaying a 15% increase compared to the partial ROM group, showing only a 10% increase in the muscles size and strength [3].

While the research is still limited in this area it does seem that working a muscle across its full ROM is more beneficial to its size and strength than working it across a partial range. Nevertheless, it's not to say one should forget partial work all together; after all it can be a great tool in overcoming 'sticking points' in a lift.  However, I do believe ROM should be dictated by exercise type, individual lever length and training outcomes. It should not be dictated by weight, a hungry ego or some pseudoscience you've read in a fancy book! 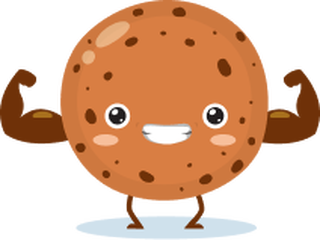 Fortunately, these type of cookies are completely guilt free and designed to give you the best experience on our website - no hidden nasties or artificial flavours here!